The nights are getting dark, quicker, and the rain is starting to come — so with outdoors activities waning, it’s a good time to get caught up on some of the shows I keep an eye on (there’s actually some good stuff on TV occasionally!).

Tonight I watched Episode 1 of Season 4 of Iyanla, Fix My Life from Oprah’s OWN Network. Iyanla Vanzant, bestselling American author, TV host, coach, minister … has picked herself up from an earlier fall from grace. I admire her determination to keep going, Oprah’s grace in backing her again, and their united opportunity to attempt to do important and much needed PROCESS WORK … even in the confines of a production TV show. 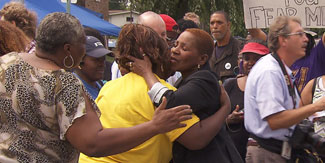 This first episode in my opinion was a powerful one (although it is controversial and has it critics). She and her crew went to Ferguson, Missouri, U.S.A. … the site of the killing of young Michael Brown by a local police officer, which touched off protests and standoffs with the U.S. National Guard. While there she paid tribute to the soul lost, brought his uncle and the local police chief together, and hosted various community forums and strategy sessions. Then she seems to have booked out of town (more on that later).

As a Process Professional it was a treat to watch this intense, powerful work up close — raw, emotional and tantalizingly on the precipice of change. In a TV medium it’s not perfect, but at least there is something on TV attempting to model and assist with some of the important issues of our day.

There is SO MUCH intervention and process work needed in race issues … and NOT the kind where armed troops are brought in (egads, watch where Iyanla’s own defenses get triggered when confronted by hummers and armed, uniformed soldiers). But the kind where people from and within both sides meet up close, speak, emote, listen … and attempt to change the underlying dynamics that have brewed for far too long.

Below is the first video, as well as links to the rest of the segments of that episode:

Like most of Iyanla’s shows, movement is JUST starting to happen when the episode ends, so we are left mid-stream … only to look on the internet to see where things currently stand (sadly, it appears not too much has changed … but some of the Pause, Plan and Participate language is still circulating).

I see the rest of her season is multiple episodes of “Help My Father of 34 Kids”, where I assume she does coaching with a guy who has spawned 34 offspring and the collateral damage in his wake. While I haven’t checked that out I do think it’s a shame that they couldn’t have devoted the season to more process work in Fergeson itself. They missed an opportunity to do really important work that, if successful, could have been a good education, instruction piece for other communities locked in similar dynamics.