Get Instant Access to These 3 Handy Resources to Learn More About "Whole Brain" Ways of Working:

Learn From Home At Your Own Pace

Social media has its upsides … like seeing inspirational stories about fascinating people doing things that bust our confining paradigms about gender, age, ability, etc. Read below (from Belleruth Naparstek’s blog) about 77 year old Willie Murphy who first began lifting weights four years ago, starting with five pound dumbbells. Today, this grandmother from Rochester, New York can deadlift 215 pounds and she was recently named the 2014 Lifter of the Year by the World Natural Powerlifting Federation.

I love stories like this, particularly of older women … as its smashes stereotypes and opens the mind to what IS possible. Not that everyone wants to be a powerlifter … but if you DID want to, you could DO IT, at any age. Same goes for whatever it is you do want to do! 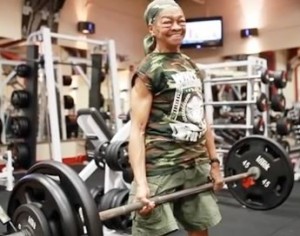 Not surprisingly, I found this story on the Facebook page of Margaret Dubay Mikus, poet, physician, photographer and artist. How do you like that smile? Allow me to introduce 77 year old Willie Murphy. She weighs 105 pounds….

The Mighty Murphy first began lifting weights four years ago, starting with five pound dumbbells. Today, this grandmother from Rochester, New York can deadlift 215 pounds and she was recently named the 2014 Lifter of the Year by the World Natural Powerlifting Federation.

Murphy, who can easily do one-handed push-ups and pull-ups, also took home titles at the WNPF World Championships for deadlift, power curl, and bench press — and she weighs only 105 pounds.

Murphy’s interest in weight lifting began after the YMCA where she works out organized an amateur competition. When she asked if she could compete, an employee told her “Go for it, Granny” and she began training.

Entirely self-taught, Murphy soon began lifting three times a week and participating in more competitions. And, she laughs at the reactions of people at competitions: “The audience will say ‘Ooh, that old lady, is she lifting?'”

“I never used the word ‘I can’t’,” Murphy says. “I would just simply say, ‘I will try.'” She credits powerlifting to helping her stay independent as she ages: “I’m not being pushed around in a wheelchair, I can shovel my own snow. And I can push my car if it gets stuck in the snow… my grandchildren, I can lift them up without any problem, and best of all, I don’t need any help when I’m carrying my groceries….You see, that’s what this is about, it’s about life.”

To watch an interview with Murphy and see her lift, visit the Democrat & Chronicle at http://on.rocne.ws/1zEIXDD.