Just a heads up that Esther Perel has just done a second TedTalk which is now available.

Esther Perel is a couple’s therapist with a specialty in desire and sexuality. I first found out about her several years ago via another therapist I respect, Terry Real. Together they have run several online courses around relationships, desire and infidelity attracting both process professionals as well as the general public.

Here’s Esther’s announcement about the new video and its attention grabbing topic:

“After months of anticipation, I’m pleased to share with you my new TED Talk that went live this morning.

Every time I mention to someone that I  a talk about infidelity, the responses are visceral:

“Are you for affairs, or against?”

“My boyfriend cheated and it has cast a shadow over us for the past two years since it happened.”

“For me, an affair is a dealbreaker.”

“Of course. Monogamy is not natural.”

These comments reaffirm to me how infidelity is woven into our culture. When I ask audiences how many people have been affected by infidelity — in their own relationships or relationships around them — consistently, at least 80% of the room raise their hands.

The topic is still taboo. But it’s time to start an open dialogue to create a safe space for productive conversation and provoke not only self reflection, but also cultural reflection.

Intense emotions accompany the subject of infidelity. Allow me to state, unequivocally, that just because I don’t condemn doesn’t mean I condone, and there is a world of difference between understanding and justifying. My goal is to help you navigate the complexities of relationships and give you a new framework to manage crisis, transitions and growth.

I hope you watch, and share the talk with friends and family members who may find it insightful. “ 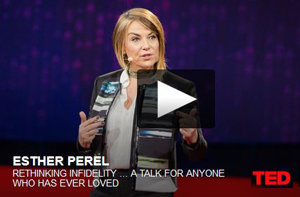