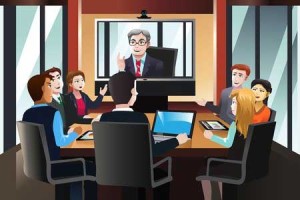 I have several clients in my practice currently who are dealing with issues of innovation, identity and visibility. About, in essence, being concerned about the practicalities and costs of being their ‘real self’. And, given the Law of Attraction (that like attracts like) I too am dealing with another layer of the onion on these issues in my own business and life too.

Most of these clients come from what could be defined as ‘traditional’ or ‘conventional’ backgrounds. They have existed, quite nicely too I might add, as internal employees and/or external contractors performing various types of corporate, government or academic work.

They have learned to function very well in these systems however there is a problem that is emerging (or has been for quite some time). The problem is that their fuller self is attracted to things that fall outside of their box. Things that are considered different, unusual or avant-garde for their environments. And they are experiencing cognitive dissonance about how to handle that.

Using Interactive-Visuals:
For several clients it’s the use of visuals in their process work. It’s hard for me to relate to at times (given I’ve been successfully using visuals in all kinds of process work for two decades now … and my mentors have preceded me in the field by another 2-3 decades). However some conservative hold outs for working visually still exist. And my visual skills students who operate in these places go through the sometimes challenging process of being a pioneer in those last bastions on the bell curve.

Pushing the Edges on Process Work:
Other coaching clients of mine have been using visuals for quite some time … they’ve successfully navigated those early hurdles of using an innovative medium. Their challenge is that they now want to push the envelope around the kinds of process work that they do. Or the populations that they do it with. 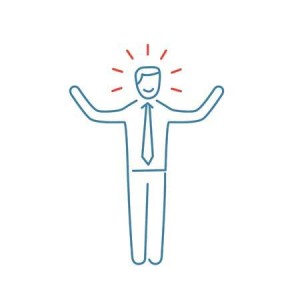 For example, several of my private clients are facilitators who are very used to working with groups. They lead strategic planning, team building, change management forums and the like. However their most powerful work is when they work at the deeply personal level with their clients. So they are struggling with how to do more of that and maintain their hard won credibility.

Authenticity in Retirement:
And, for yet other clients, it’s more a matter of having persevered in a traditional environment or role for years and even decades. And retirement is just around the corner or already happened. They will soon be or are now free to pursue ‘who they really are’ as they put it. No longer having to be a certain way for appearances sake they often are examining lost, suppressed or forgotten aspects of themselves. So they can enjoy their remaining vibrant years as their whole selves.

My Guidance:
Even though these groups vary greatly in terms of their roles, ages, and pursuits my overall guidance is basically the same.

Figure Out Your Next Logical Step and Take It:
No matter what my clients are wanting to do (use visual skills, create new offerings, uncover their forgotten selves, etc.) they always have at least one or several ‘next logical steps’ lying right beside them. Things that they know would make movement towards their goals.

In the case of the visual skills student they have steps around practicing their craft, learning more about their craft, approaching certain people or groups to use their craft and the like. 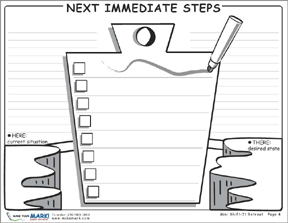 For the Process Professionals who want to broaden their reach and their offerings … they have additional research and study they can do. Pilot programs they can create and test drive (even for low or no fee if need be). People they can approach. Sales and web copy they can write about their new offerings, maybe eventually even new websites or business entities once their ‘it’ becomes clearer.

Same goes for the people uncovering their lost selves or birthing new ones in retirement. They have steps around taking up old interests that they cast aside. Poking around new ones. Seeking out certain interest groups or organizations. Visiting geographies, events, people that appeal to them, etc.

No matter who you are and what you want to manifest there are always next little logical steps that can be clarified and taken.

Do Your Inner Work:
Clarifying your next little logical steps is quite easy. Unfortunately actually doing them can sometimes be more complicated. If my clients find they aren’t doing their logical next steps then it’s often time for some ‘inner work’.

There is usually a reason (or several reasons) why a person doesn’t take their left-brain steps. And it usually has to do with right-brain emotions. Something of an emotional or belief nature is rising up and interfering when they contemplate their steps. And it’s stopping them in their tracks even though their left-brains know that is what they ‘should’ be doing.

There are many, many ways to get at the underlying right-brain causes … to root out the often sub-conscious reasons that people thwart their own success. Outdated reactions and beliefs from earlier events in life (or even past lives!) is often the culprit. Helping the body/mind/spirit complex of the person really get that ‘that was then this is now’ in order to remove energetic charge that is hindering them and their desired pursuits.

See Practical Energy Work and Private Coaching for a listing of some of the inner work modalities that I practice as a coach. There are also others that exist too!

Course Correct Accordingly:
The third thing that I’m often reminding my clients about is that ‘you are capable’ … ‘if you make a mistake you can always course correct’. I’m not a big advocate of quantum leaps. They can be done but they are often tough on the person and those around them (because their consciousness is not fully up to speed yet to easily occupy that new zone). Instead, I’m an advocate of incremental development … the step-by-step approach. Figure out what next little thing can be done, and do that. Then figure out the next little thing that can be done and do that. Do inner work when needed. Rinse and repeat.

Should you make a misstep, no big deal … that is good, useful feedback. You can evaluate accordingly, modify and course correct as needed, eventually building up to bigger and bigger shifts in their own right inherent timing. Eventually looking back and admiring just how far you have come!