Spring has finally sprung here on Vancouver Island in British Columbia, Canada where I am. We’ve had a cooler than usual winter for us, so spring was delayed by a few weeks. But its making up for lost time now, everything is bursting into yummy delicate shades of green and bloom.

As I’ve mentioned in previous eZines, I’m having to temporarily relocate from downtown Victoria, due to a large construction project next to my home and studio. Blasting and webinars do not mix!  After an extended road trip, and a house sit, I’ve temporarily moved out to a rural area about an hour west of the city, called Metchosin, where I grew up. 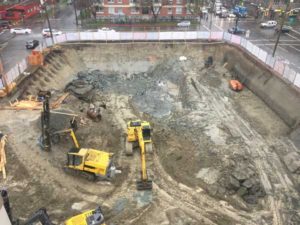 Booted Out By Construction 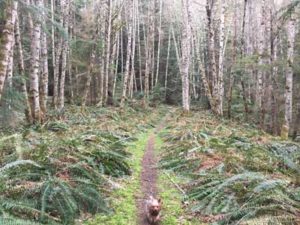 Back to Rural Metchosin for a Bit 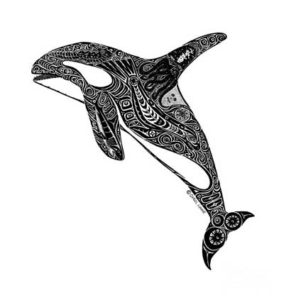 The name Metchosin is the anglicized version of the native “Smets-Schosen”, which means “place of stinking fish”. Local legend maintains that many years prior to the Europeans’ arrival, an orca beached and died, and that everywhere that could smell it became part of Metchosin. The town’s museum, which was once its one-room school, has whale vertebrae on display. Metchosin’s community symbol is, perhaps unsurprisingly, an orca.

The beach is a few miles from where I am, so no Orcas. But I do have to be alert to the resident Vancouver Island Black Bear in the neighborhood. Its emerged from its winter sleep and is raiding garbage cans … so I wear a string of bells around my neck when I take JJ for his walks so I don’t surprise it!

This move to the woods has really been delicious (my teenage self who couldn’t wait to get the heck out of here to explore the world, is laughing at my changed tone!). My Graphic Recording and Graphic Facilitation career took me all over the world … and now I can honestly way there is no place like home. I’m appreciative to live in such a beautiful and grounded place. And from here be able to assist folks from all over the globe through the magic of technology.

Massive technological shifts coincided with my ability to build SHIFT-IT Coach, Inc. and my SHIFT-IT School. Incrementally, over a decade, I have gone from being home only 5-6 days out of the month (due to extensive travel to clients) to working primarily from home via web conferencing. 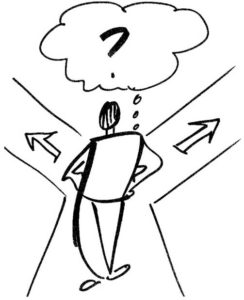 There have been pros and cons to this shift. And, with even more technological change rapidly impacting the process community, I’m finding myself contemplating this organic to synthetic shift very deeply. Its impact on my little ol’ life as well as the larger societal implications.

Technology itself is neutral … it’s the consciousness of its creators and those who use the creations that bode the impact for humanity. We are at an amazing and powerful crossroads as a species. I, as I’m sure you do too, hope we navigate this transition wisely with not only our left-brain intellect but with our right brain heart and soul too. Our future collectively and individually literally depends on it.

Yours in SHIFTing IT,