A few years ago I wrote a blog post with some musings around technology and its impact on Process Professionals (those of us who do process work of various kinds with groups and/or individuals).

Now with the Covid-19 pandemic … the rate of speed of adaption of tech for regular citizens is accelerating.  What I wrote about in that past post has suddenly arrived with more great changes just around the corner.

I come out of the Graphic Recording / Graphic Facilitation field — using visuals in various ways to helps groups think and make decisions. 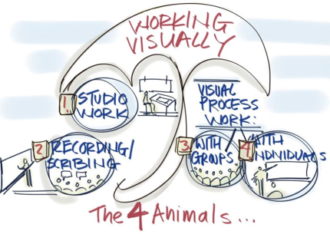 I was early in my tech shift (at least for teaching courses online and working with individuals via Visual Coaching).  I’ve been online for the last eight years.  Its been an “interesting” experience to say the least to witness pretty much my entire field jump into the online space enmass in one fell swoop this last year.

The mass of the Graphic Recording part of the field is going with teeny iPads and therefore software compatible with those devices.

In my opinion, Graphic Recording isn’t being integrated well into the web conference environment and it’s basically being killed.

It can’t be seen properly in Zoom like it can in the real world (where a meeting participant just turns their head to look at a Graphic Recorder doing her thing at the wall). So it’s being relegated to an ‘after the fact’ kind of thing.  Maybe there is a rare share of the emerging record as the meeting progresses.  But more times than not (at least in the meetings I’ve been a part of where GR is being used) its a design piece that attempts to sum up the meeting afterwards. Shared on Social Media as a pretty takeaway of main points if one is lucky.

That and the ‘undo’ function, and all the other doodahs in the software programs, are turning Graphic Recording essentially into Graphic Design.

It was already happening in analog Graphic Recording before the pandemic.  Now, its pretty much a done deal.

I don’t write that statement easily. Being an early adopter and teacher of Graphic Recording skills I write it with a lot of grief.  It was such an incredible field. 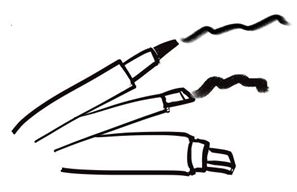 Humane.  Human. Real. Authentic.  I’m so glad and appreciative that I had a good decade as a travelling Graphic Recorder back in the day.  And that the world had authentic, real Graphic Recording for a time. Human beings needed it. We still need it.  But one can’t change ‘progress’ right?

As I wrote in my blog post from a few years ago, I suggested to my students that they should migrate into process work ASAP.  That there was more of a future in facilitating the thinking and feeling of groups and individuals than there was in the Graphic Recording side of the field (unless you were an graphic designer or illustrator).

So far I think my instincts on that were right.  However, it’s only a matter of time until technology really impacts the field of Visual Process Work (aka Graphic Facilitation and Graphic Coaching) too … as AI and Virtual Reality are coming.

Unlike Graphic Recording, the facilitation of groups using visual means is doing relatively well online. Now that we are moving into the 2nd wave with the pandemic, clients and practitioners alike are facing that we aren’t going back to in-person meetings anytime soon.  So we’re figuring out how to do collaborative thinking work online.

Its the wild west as we all scramble to figure out how to replicate what we do in a physical meeting room into a digital one.  With pros and cons.

MURAL as an online platform has received big financial backing.  MIRO is another favorite as is Jamboard.

Graphic Coaching (which is my pioneering niche) is doing great online.  Always has.  As it was already a handy way to work before the pandemic and many practitioners and 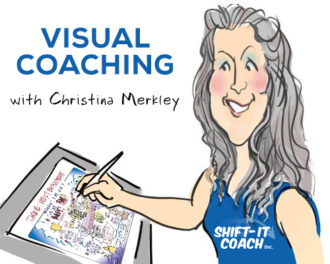 clients alike are clueing into that now.  As only the practitioner and one client (usually) are present, the screen sharing and viewing are much easier than they are in group work.

As folks who may have been reluctant to try it have now been forced online anyways.  So they are much more open to doing coaching online rather than in-person.  Gone with rare exceptions are the days of phone coaching.  Web conference coaching is becoming standard practice.

And, the visual way of working is great for online coaching, counseling, therapy, personal growth modalities, etc.  This niche within the niche is in a sweet spot right now. I anticipate (if the economy doesn’t totally tank so people still have disposable income) that it will continue to grow.

I am concerned about the future of Visual Coaching though. AI, augmented reality and Virtual Reality, as mentioned in my post from 3 years back are coming up strong.  It’s going to be very interesting (and concerning) just how quickly these technologies move into the online process work.  And what it’s going to mean for client and practitioner alike, let alone our whole society. Do you want to coach in Virtual Reality?

For good and for bad we do not live in boring times.  How we navigate the new technology is going to determine the kinds of world we have.  Who determines what tech is developed and how it is used is a hugely important thing that the human species needs to navigate. If it hasn’t already been determined (which it probably has).

I listened to this video on the way back and forth to the grocery store this morning.  Does a good job of summing up the big things that are coming and that exist in some areas of the world already.  As different belief systems deal with the tech in different ways. Authoritarians impose so much quicker.  But is that the route that the rest of us will go down eventually too?!  What can we do about it? Education and awareness are always the first step.

The title (like so many video titles nowadays) is click bait. The whole of the video covers much ground, not just the social credit system that China is implementing. Although I think it’s really important the regular citizens are aware of the extent the tech integration is occurring, RIGHT NOW … not just far off in the future.

Also, pay particular note to what she says about the Left Brain and the Right Brain … and HEART.  So much of my own teaching and coaching work is about balancing the intellect with the heart.  I’m soooooo glad she mentioned this too.  Its imperative for the future survival of the human species.

Funny how Star Trek (I’m thinking of The Borg) was so precognitive. This is the crossroads that humanity is now standing at.  I have a sneaking suspicion it’s why your soul and my soul choose to be here on Earth at this super important time.

Let me know what you think.