If you’ve been an ezine reader of mine for a while (or one of my coaching clients), you’ll know that I’m a big fan of Law of Attraction (LOA) principles.  I use them constantly in my facilitation and coaching work and in my own personal life (with graphics of course!).  There has been a lot of attention lately in the more mainstream media, with the success of Rhonda Byrne’s The Secret (video and book) – kudos to her for tapping into a real vein of interest and need.

With the success of The Secret, more and more resources are being posted online.  In previous posts, I’ve written about (and provided links for) the Oprah shows that she did on The Secret with many of the teachers. (see back in Feb and March). 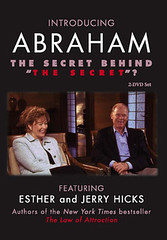 Now I am very happy to see that my favorite Law of Attraction teachers, Jerry and Esther Hicks, ala the Teachings of Abraham … are now getting some much deserved attention (not that they need the attention, they are doing amazing work and have been for 20+ years … but its nice to see The Secret Behind the Secret getting out).

They have just created a new DVD set … that explains their path and the LOA wisdom that Abraham shares.  More Info.

Also, Oprah just had them on XM Radio on March 29th… and has two more shows lined up for later in April 5th and 12th.  If you missed the March 29th show, see this link for a website that has it available for listening.  Also, check out Oprah’s XM page on the interview with Esther Hicks, at: http://www.oprah.com/xm/oprah/oprah_main.jhtml

Some other good LOA resources that are available: James Ray and Bill Harris (both teachers featured in The Secret) have some interesting resources available.  They both hosted an event together in Vancouver last summer that I caught … I was already familiar with Bill Harris as I’ve been using his Holosync meditation/awareness technology for a few years now … but James was a new one for me and I really enjoyed hearing his take on quantum physics and the like.  I’ve heard really good things from people who have attended his trainings.

James Ray posts the Beyond Positive Thinking interviews that he and other LOA teachers participated on during a series of Larry King shows.  Very good stuff.  You can catch them here at: http://jamesray.com/resources/larry-king-live.php 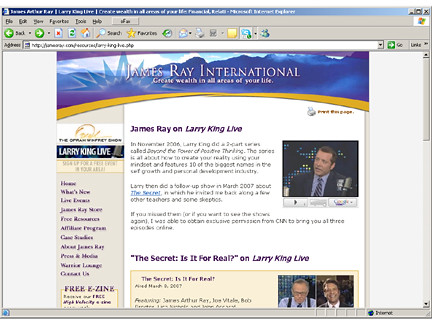 And, Bill Harris adds on where The Secret left off … he posts a very interesting letter on aligned actions, etc.   See his letter entitled: Two Parts of The Secret That No One Talks About .. and Why The Secret Won’t Work Without Them.   Read it for yourself at: http://www.themastersofthesecret.com/letter/ 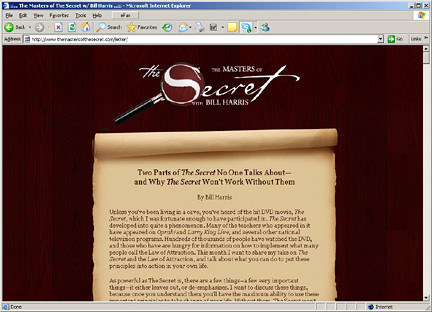 p.s. Interested in using Law of Attraction principles to shift your life for the better? If so, check out my SHIFT-IT Home Retreat Kit – 17 visual maps to walk you step-by-step thru powerful personal planning and visioning process.  Make Law of Attraction and Visual Learning work for you!