Abraham-Hicks, one of my favorites for Law of Attraction info, is currently touring their way through the Pacific Northwest … in the general vicinity of where I live.

Every year they make a stop in Portland and Seattle and an unofficial one in Victoria, British Columbia (my town), as we’re the last port of call on their Alaskan cruise. A vibrational stalker, I usually stroll the breakwater that evening to tap into their vibe in the air, hehe. Hoping I’ll get an Esther Hicks sighting (Esther, come take a stroll with me and JJ (Jerry Jr!) we’ll meet you on the dock!). 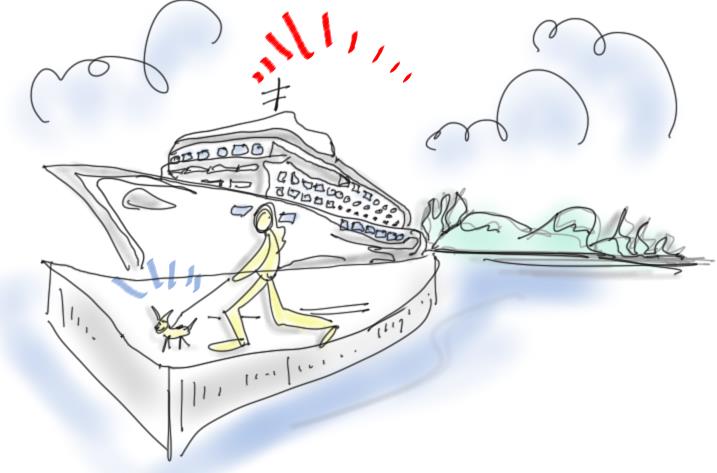 It’s Time to Share Their Hot Seat Answer:
Recently “Law of Attraction” as a discussion topic came up with two of my coaching clients. And I shared with them my experiences in Portland as it tied in nicely with what they were grappling with. So I figured it is time to share my Abraham-Hicks experience publicly now here in the eZine and blog. 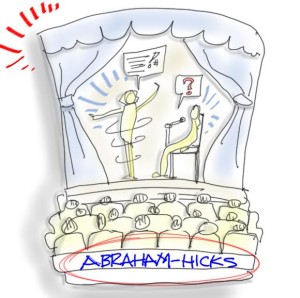 If you are new to Abraham-Hicks, their workshops, or Law of Attraction in general, check out my blog post on Tips for Attending Your First Abraham-Hicks Workshop (written in 2009 but the info pretty much still stands with the exception that Jerry now participates from a different vantage point).

How I Got Up Into the Hot Seat:
Getting up on the hot seat is all about alignment and desire.  You get there by having something you want to discuss, being ok about  discussing it publicly, your subject fitting in energetically with what that gathering is about, and Abraham knowing that what you are going to ask will benefit overall (not only yourself, but to those present, those live streaming, and to those who will be listening in the future).

While I have had success in being selected via their Hay House call-in shows, I had previously had too much resistance to be able to get up on stage in-person (yes, I may facilitate for a living, but I’m actually kinda shy when not in role!).  Plus I have deep reverence for the work and some inner worthiness issues underneath.

Anyway, this time I made it up on stage and I think it’s because I got some help … from a special man. 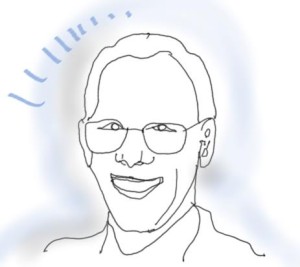 I have an affinity for Jerry Hicks (Esther’s late husband and the co-founder of their work).  Having listened to all of their recordings going back to the early days, I admire his business suave and his insatiable curiosity. When he was alive (in the physical) and I was attending their workshops and cruises, I would often cross his path (open my cabin door, and there was Jerry walking past … whistling or singing is my remembrance, having a good ol’ time in his beige hat). He autographed a book for me, although I heard afterwards that he doesn’t like doing so (oopppps). 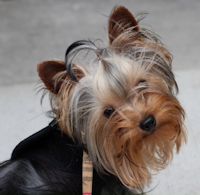 With the risk of sounding a tad fanatical, I will admit that my little dog, JJ, is named in his honour (Jerry Jr.). As a touchstone for my appreciation of what Jerry Hicks brought into being with his strong desire and many capable skills. Felt it made good sense to link my constant canine companion with those good feeling associations. (Jerry, I hope you take a dog being named after you as the sign of respect it is intended to be … he’s a dog who loves life and who literally smiles!).

Anyway, that day in Portland, I called on Jerry’s help (the man, not the canine!). In my mind I said “Jerry, I’d like your help in getting up there. If you can use me to demonstrate something, like doing processes or whatever, then use me. I love the Abraham work and I’d really like to have this experience. And, I need Abraham’s coaching right now … them to coach me”.

No sooner had I thought it, then Estherham turned to look right at me. And nodded. And I was called up on stage. Glad, but with my heart pounding …

What They Said:
Recording Details: If you happen to have the August 3, 2013 Portland recording, my question starts in at the 2 hour 31 minute mark and is called “She Wants to Move Up To Higher Disk”.

At that time, I was going through a tough patch. My boyfriend and I had ended things. Plus a business alliance had also folded, with unpleasantness. So I had come to Portland for some solace and to regroup. To sort out ‘who am I now’ and ‘what do I now want’. In short, I was licking my wounds and wanted to feel better! 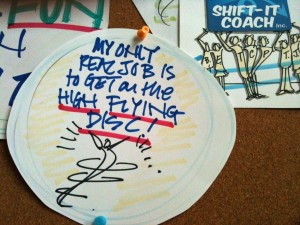 Abraham had just introduced their concept of ‘get on the high flying disk’ (that one’s most important job is the management of one’s personal energy … i.e. the ‘high disk’).  I’d listened to a few segments of them outlining the concept, and I agreed, but I wanted to know … “how?!”  “How does one get on the high flying disk”.  And how can you move up if the disk you are on is low?”.

I figured, since I had telepathically communicated my interest in process drills to Jerry, that Abraham would put me through my paces with some processes to raise my vibe on the two topics I was reeling from.

But no, instead, they said the better question to ask was not “how” but “when”. That if “we effort to move up then it’s just the path of least resistance via the same old pipes”. And that the “best time to get on the high flying disk is when contrast is least evident”. Not when it was highly activated like mine was. That if I did try to move up under those conditions then I would just frustrate myself and it would contribute to a degradation of my worthiness and to my feelings of not being able to do it. Yup, they were right, that is exactly what had been happening … flogging myself for being a bad Law of Attraction practitioner! 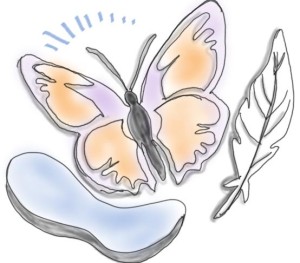 They said I was the perfect person to call forward, as everybody could relate and were also feeling “enough with the high flying disk already … tell us how to get on it!” They then proceeded to tell a story that I have heard repeatedly in their recordings … the Butterflies, Blue Glass and Feather story.

For those of you who don’t know it, the Butterflies, Blue Glass and Feather story goes like this (I’m paraphrasing):

Back in the day, Esther used to give private phone consultations. One day a woman called who was upset and wanted to talk about a certain specific thing. So strong was her upset that her vibe was really out of whack and talking about that certain thing really wasn’t going to serve her. As much as she wanted to and was insisting on. So they attempted to get her off the story she was telling and onto something that was more benign and better feeling (so her vibe could stabilize into a better feeling place). To make the point that when we activate something without resistance it comes quickly.

So they tried to coax her into thinking of three things: butterflies, blue glass and feathers (things that she had a much better (or even neutral) relationship to). But she was having nothing to do with it. And left the phone call rather disgruntled.

Later that day, Esther and Jerry were strolling through a little town (I think it was in California, like Monterey or La Jolla). And she felt compelled to go into a cute store, pulling Jerry along, where in the back lay an amazing collection of blue glass. Not making the connection to the phone call earlier, they continued on their way, finding themselves in a park being engulfed by a cloud of butterflies, so thick that they had to keep their mouths shut to avoid eating them! Then, from across the field, a little boy made a beeline to Esther, with a feather in his little hand.

It was then that it hit her, she had manifested, in short order, all three of the things that Abraham had been trying to soothe the woman on the call with.

Audio Recording: Yippee, thanks to blog reader Jake Kodak for alerting us that the audio exists online. Here it is so you can hear Abraham-Hicks fully, rather than just my paraphrasing. Thanks Jake, you rock!

Like I said, I had heard this story many times, and truth be told my first reaction was disappointment “this is the answer I get after a decade of trying to get up here?!”. It took me a while (like months, or this full last year), to really listen again and again and appreciate the fuller message they were communicating to and through me.

The moral of the story, or at least as well as I understand it at this point in time, is:

You Are Gonna Like This:
At the end of their answer to me, Abraham-Hicks ended with “Really, you are gonna like this.” And they were so right. It took a while, but I eventually shifted my focus to other things, to things that were going well in my life. And there were SO many things. Now, I can look back and see, while both of those relationships (the personal one and the business one) were good when they had began, they both had shifted over time, and not in a good way. It’s a blessing that centriphical force spun them away as our vibes were no longer a match. And new forms have emerged in their place. Forms that feel a heck of a lot better!

It may have taken a bit to integrate Abraham’s wisdom but now do I not only get it but I like it. I REALLY like it. And I’m passing their message and wisdom along to you. May you get it and like it too!