I’m in the midst of offering the spring online version of Fundamentals of Interactive-Visuals. In this, my flagship visual skills program, I teach the four main ways of working visually, in an interactive way, with groups and individuals.

The four ways of working visually are: Studio Work, Graphic Recording, Graphic Facilitation and Graphic Coaching/Counseling (fyi, ‘graphic’ and ‘visual’ are interchangeable). For a fuller article and video, click here.

Over the length of the program participants learn about and get to taste test each of these four applications – by rolling up their sleeves and doing themselves. I demo each application first … as this work is so experiential that its best to learn by observing then doing.

Below are some Visual Coaching Tools, one of which I did earlier today (the other two are from previous cohorts). Two volunteer clients chose to focus this simple visioning exercise on the visual skills they are learning in class. The other focused on her emerging business, specially ‘getting herself out there’. 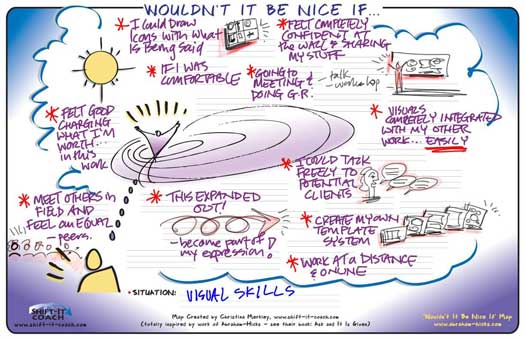 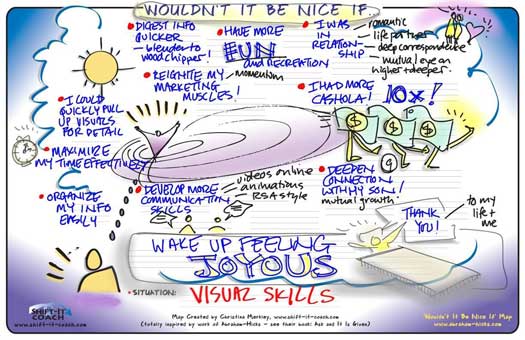 The “Wouldn’t It Be Nice If” Exercise:
The Visual Coaching Tools above are built around a simple visioning exercise called ‘Wouldn’t It Be Nice If’ via a visual template I created based off of an easy process by Esther and Jerry Hicks in their book called Ask and It Is Given.

If you are interested in personal visioning and manifestation via The Law of Attraction this is the book I most recommend as a good starting place (I used to run study groups around it).

All you do is focus on a subject and then complete this sentence ‘wouldn’t it be nice if ________’. The coach just keeps on asking the client that question and records their answer on the template, until it is filled up.

I like to use this exercise as the demo for Visual Coaching for a number of reasons. First, it’s pretty safe even in the hands of people who aren’t already coaches or therapists (so folks in my training can taste test the feel of Visual Coaching without having to be a coach … although many are).

Secondly, its good bang for the buck so to speak, as usually the coachee gets a good experience from it even though their coach is just experimenting with Visual Coaching techniques.

Access to Visual Coaching  Tool:
A couple of years ago I posted more on this specific Law of Attraction exercise, including access to the map so you can do it too. Click here.

Created on Digital Tablet:
The three examples that you see above were done on a digital tablet via web conferencing. I work with clients across the globe, so while Visual Coaching can be done in person (using very large sheets of paper on the wall), I tend to work mostly digitally in my own coaching practice now. I’ve written a previous post on this subject, including which specific tech I use here.

See Video of Visual Coaching Tool Being Constructed from Start-to-Finish:
If you’d like to see Visual Coaching in action … i.e. see a template being built from the ground up with a client before your eyes (rather than just the end artifact) … then sign up for the Free Goodies on my site (see sign up box in side column on my sites).

You receive a Visual Coaching Tool that you can use on yourself: called Focus on Me. And get immediate access to two videos of me helping clients through it (by tablet).

And, you will also receive access to a free 90-Minute Webinar explaining all four ways of working. In case you too are interested in the visual way of working.

Plus a subscription to my twice-a-month electronic newsletter which delivers my latest articles and blog posts, as well as info on classes, events and other announcements.

Yours in visual expansion,