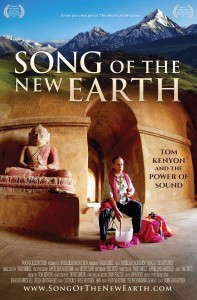 As written about in a previous post, I have great respect for Tom Kenyon’s sound and healing work.

It was nice to learn more about this fascinating man and his journey to actualize his gifts: both left-brain and right-brain. And, for the Visual Learners in our midst, the style in which some of the movie was done (illustrations and sketches) was great to see too.

If you aren’t a Gaiam subscriber, you can view or buy the movie here.

I particularly enjoyed seeing Tom in his west coast element (just a bit down south from where I live) and also his journeys to Tibet, France, etc. And, HEARING snippets of his sound work of course … magical!

And, what also really landed for me was his honest sharing of his left-brain struggle to accept the very right-brain nature of his work. How the scientist side of him (he’s a brain researcher after all) comes to terms with evocative messages, sounds and happenings from the other side of himself (including beyond the veil and from the earth herself).

Below is the synopsis of the film.

Song of the New Earth features the transformative life journey of renowned sound healer, psychotherapist and modern day mystic Tom Kenyon, who went from being a young aspiring Nashville musician to an internationally revered sound alchemist.

From giant caves in the south of France, to the golden-chandeliered symphony halls of Vienna to the snowy mountain peaks of Tibet, the documentary presents Kenyon’s quest to integrate modern science’s advances in sound research with the ancient mystic traditions of Tibetan Buddhism, Yoga, mystical Christianity, Shamanism, Egyptian alchemy and more.

A visual and aural feast, Song of a New Earth provides viewers with a distinctive and intimate portrait of one man’s mission to not only heal ourselves but ultimately our precious planet…Mother Earth. A transcendent, original and healing experience, this unique film transports viewers through Kenyon’s rare, divine gift.