During these shifting times, my Seva is to help folks think and feel on their most pressing topics. I offer Process Popups (every few weeks) and Recorded Visual Coaching Sessions (as my schedule allows).

Below is the most recent Process Popup – Happy Birthday to Lisa and Joy!

After 10 minutes of meditation (which we always start with), we heard reports (check-ins) and then settled in on what to focus on today.

Joy brought forward some deep processing she’s in the midst of. Work and relationship issues that rest on the shoulders of earlier Family of Origin dynamics – more specifically on THE INNER MASCULINE with roots to her FATHER.

As she talked, I zeroed in on her mixed emotions about VISIBILITY. The desire to get herself and her work more out into the world, yet a discomfort in doing so too.

I rattled off several ways we could enter into the topic: Self Inquiry, Orphan Rescue, AlphaMind and Polarity Square. Funny enough I managed to pull off all of them in the course of this wide-ranging session.

We started with a Polarity Square, given VISIBILITY AND INVISIBILITY were present. We all helped build it, which is a benefit in doing group processing.

Then we shifted into Self Inquiry, helping Joy meet the emotion of HATE, which was present for her and which quickly lead into physical sensations in her head.

That quickly lead into the PAST LIFE RECALL of being killed as a POWERFUL WOMAN. Which lead into an ORPHAN RESCUE of her past self via her ALPHAMIND.

And then into ANOTHER ORPHAN RESCUE of a younger self from this life who was intimidated by her PHYSICIAN FATHER. Her Male Guide from AlphaMind acting as a surrogate father figure. And a mysterious BIRD WOMAN with a SOFT NEST who arrived at the perfect time.

To top it all off we had her MIND/INTELLECT wanting to get in on the rescues. So we offered it LIBERATION. Must have done the trick given it was anointed with a gold crown – the ability to connect with HER ANCESTRY. Her Mind now has a SPIRITUAL PURPOSE to GROW UP and EXPAND OUT. Yes please, handy things for a Visual Coach to possess!

Was a lovely session for Birthday Girl Joy – quite the present!  And Lisa’s Birthday was the next day so parallel processing for her too, yes!  One never knows what will happen with live Process Popups. This one was a special delight with people so well versed in the depth methodologies. 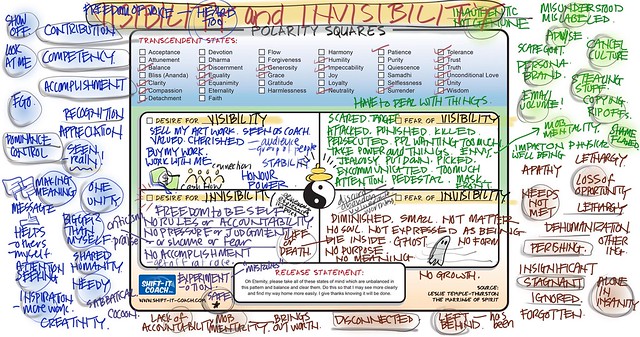 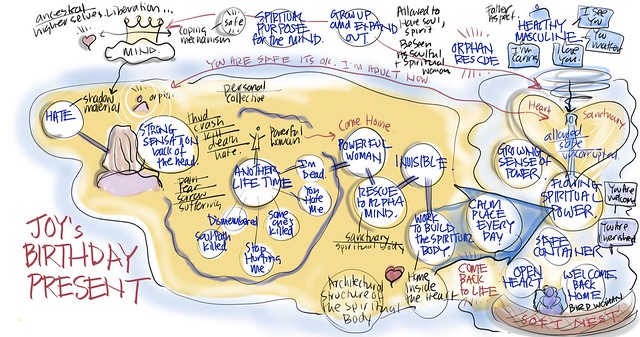 DROP-IN ON A PROCESS POPUP:
Next offering: Monday, October 18, 2-4pm, join here.
convert to your zone

HAVE YOUR OWN VISUAL COACHING SESSION:
Public and private options here.

LEARN TO WORK VISUALLY TOO:
Of course, you can!  See SHIFT-IT School for trainings and study kits.